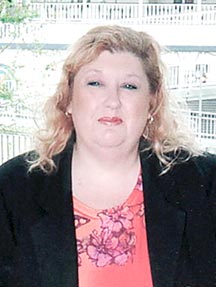 Mrs. Carolyn Reece, a home caregiver of Hartsville, died at the age of 50 at 7:44 a.m. Wednesday morning December 13, 2017 at the Residence at Alive Hospice in Nashville where she was admitted December 11th from St. Thomas Mid-Town suffering from a stomach infection.

The daughter of Mrs. Joyce Bates Ray of South Carthage and the late Sherman Edward Ray Sr. who died at the age of 61 on July 23, 2004, she was born Carolyn Lynn Ray in Martinsville in Martinsville City County, Virginia on August 10, 1967.

On August 9, 1913 she was united in marriage in Lebanon to Ricky Wayne Reece Sr. of Hartsville and the owner-operator of Reece Paving Co. in Hartsville.

Mrs. Reece was a talented singer who had performed on the General Jackson Showboat shows.

She was a 1985 graduate of Rock Hill High School in Rock Hill, South Carolina.

She and her husband attended the Hillcrest Baptist Church in Lebanon.

She was employed by the Choices Program administrated by the Tennessee Bureau of Medicaid.