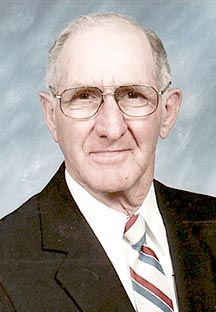 His minister, Edward L. Anderson, officiated at the 3 p.m. Sunday afternoon February 4th funeral services from the Carthage Chapel of Sanderson Funeral Home. Graveside services were conducted Monday afternoon at 1 p.m. with burial following in the Butlers Landing Cemetery in the Butlers Landing Community of Clay. Kenny Westmoreland officiated at that service.

One of fourteen children of the late Benton Thomas Walker and Dovie Mai Reecer Walker, he was born Durell Walker in the Moss Community of Clay County on September 26, 1933.

An interesting fact about his siblings is that they were all born two years apart alternating boy girl, boy girl thru all fourteen births.

The Kentucky Head Hunters wrote a song about his late brother, Dumas Walker, which was something he was very proud of.

Truck driving was a passion and at an early age he transported tobacco from warehouses in Tennessee to tobacco companies in Kentucky and North Carolina.

Mr. Walker had a storied career as an experienced gasoline transport driver. His career began driving for Lynn Oil Co. in Celina which was later sold to Waggoner Oil Co. in South Carthage for which he drove for over forty years and after their sale to Kimbro Oil he drove for Kimbro for a while and then for Rankin Oil Co. until they sold.

He retired as a security guard for Allied Universal at the Nyrstar Zinc Mine in Gordonsville where he worked for five years before retiring when his health began to decline in November of 2017 at the age 84.

Mr. Walker was a charter member of the South Carthage Volunteer Fire Department beginning in 1963 and served for over thirty years.

He often commented how the Lord had blessed him to be able to work even past his four score years.

He attended the Celina High School for twelve years.

On November 27, 1955 in Celina, he was united in marriage to the former Freddie Sue Weaver, also of Clay County.

After moving to Carthage he was a member of the Carthage Church of Christ.

Mr. Walker was a lover of the land and enjoyed gardening and farming with his neighbor and close friend, the late Carson Maxwell, and also he and the late Jimmy Ray Scurlock planted and tended some beautiful gardens on Cedar Point Circle.

He was a sports enthusiasts and loved to watch his grandchildren play basketball. Durell especially enjoyed attending NASCAR racing events. He also enjoyed watching his grandchildren show livestock around the state.

He was a soft spoken, humble man with a gentle spirit and never met a stranger.

The Walker family has requested memorials to the cemetery mowing fund.