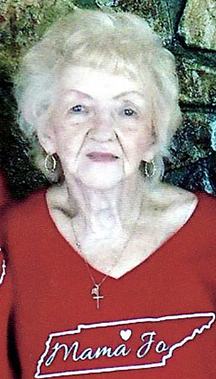 Mrs. Betty Jo Burke of Granville, a homemaker and former owner with her late husband of Burks Campground in Holleman Bend, was pronounced dead at 6:05 p.m. Friday evening June 29, 2018 at the Riverview Regional Medical Center E. R. in Carthage at the age of 85.

Due to failing health she had left her Holleman Bend Lane Farm and made her home the last few months with Martha Scurlock Sanders in South Carthage.

Funeral services were conducted Tuesday July 3rd at 1 p.m. from the Carthage Chapel of Sanderson Funeral Home. Bro. Jackie Dawson officiated and burial followed beside her husband in the Garden of Gethsemane at Smith County Memorial Gardens.

The only child, she was born Betty Jo Merryman in Lebanon on October 3, 1932 and was the daughter of Carthage businessman, the late James Walter Merryman who died July 9, 1957 at the age of 57 and Helen Irene Cothern Merryman Bennett who died August 9, 1990 at the age of 82.

Her father was co-owner of Cothern & Merryman Grocery on Main Street in Carthage where the former Carthage Jewelry was located and owner operator of Merryman’s Barber Shop also on Main Street.

She was a 1950 graduate of Smith County High School where she was nicknamed “Betsy” and it was said, “She was as merry as the day is long”. She was also secretary-treasurer of the Glee Club and was a member of the Future Homemakers of America.

In 1960 she graduated from the Southern Academy of Clinical Technology and became a licensed medical technologist.

A daughter, Melinda Jo McClanahan Young Francis, died at the age of 62 on January 15, 2018 at her Rome Community home of cancer.

She was also preceded in death by two great-grandchildren, Kambier-Lee Irene Woodmore and Sadie Lorraine Cootes.

In Nashville on December 31, 1987 she was united in marriage by then County Court Clerk and cousin, Jimmy Norris, to Nashville native Albert Lee “A. B.” Burke. He preceded Mrs. Burke in death on June 29, 2012 at the age of 80 following almost twenty five years of marriage.

After giving up employment as a clinical technologist, she worked at the Hartsville Nuclear Plant.

After the closing of the Nuclear Plant and before retirement in 1996, she and A.B. left Nashville where Mrs. Burke was a driver for the Metro Nashville-Davidson County School System and purchased their Granville farm and established a campground.

Before becoming employed by Metro and the Hartsville Nuclear Plant she worked as a laboratory technician at Hendricks County Hospital in Danville, Indiana and later at Sumner Regional Medical Center in Gallatin, and in Nashville was employed in the office of Dr. Golden and the American Red Cross.

Mrs. Burke was saved at the age of 10, was baptized and became a member of the Carthage First Baptist Church. She also attended the Full Gospel Church in Carthage.

She was a proud member of the Smith County Democratic Women’s Club.