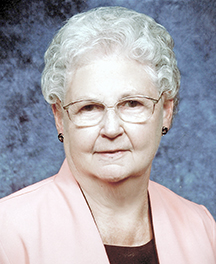 The oldest of four children, she was born Ernestine Rigsby in the Boultons Bend Community and was the only daughter of the late Ernest William Rigsby who died July 8, 1988 at the age of 79 and Annie Mai Baker who died on February 2, 2000 at the age of 86.

Two brothers preceded her in death, Frank and Kenneth Rigsby.

At the home of the late Eld. Phocian Gibbs on April 27, 1967, she was united in marriage to Dixon Springs Community native Guinn Alexander Gregory. He preceded her in death on May 20, 2008 at the age of 68 following just over forty one years of marriage.

Her husband served with the Smith County Sheriff’s Office for over twenty four years before retiring as the chief Deputy for Smith County, a position he occupied for over seventeen years.

Before her retirement in 2006, she had been employed under the term of former Smith County Sheriff Johnny Bane as office clerk and dispatcher for over eighteen years, beginning in 1988.

Mrs. Gregory was saved at an early age and was baptized into the full fellowship of the Plunketts Creek Missionary Baptist Church, where she remained a member.