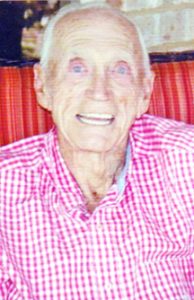 Dixon Springs native Thomas Cox Jr. died at 10:12 a.m. on Thursday morning, May 16, 2019 at his Skyview Drive home in Columbia under the special care of Compassus Hospice following a period of declining health. He was 91.

Funeral services were conducted at 3:00 p.m. on Sunday afternoon Nay 19th from the Carthage Chapel of Sanderson Funeral Home with his pastor, Eld. Rickey Brooks officiating. Interment was in the Cox family lot in the West section at Dixon Springs Cemetery.

In Lebanon on December 22, 1962, he was united in marriage to Pauline Gulley who preceded him in death on December 1, 2009 at the age of 83 following almost 47 years of marriage.

Mr. Cox left high school at the end of the 1944 school year to join the United States Army during World War II. Following his service he returned to Carthage High School, now Smith County High School, for the 1947-1948 school years where he majored in Agriculture, played football and basketball before his graduation in 1948.

He was employed in the oil and gas pipeline industry beginning his career in construction and later was elevated to a position over inspections and retired with total service of over 40 years of service with the Texas Eastern Pipeline Corporation.

Mr. Cox was saved at an early age and was baptized into the full fellowship of the Maces Hill Missionary Baptist Church where he remained a faithful member.