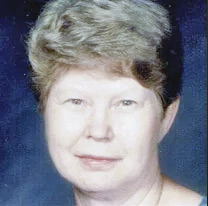 Mrs. Hodge was born March 19, 1936 in Hickman, TN, a daughter of the late Johnny Floyd Agee and Posie Cornelia Agee. She married Dr. R. David Hodge on December 17, 1960 and he preceded her in death on June 10, 1996. Mrs. Hodge was also preceded in death by Brother; Billy Agee.

Mrs. Hodge was a graduate of Gordonsville High School. She also graduated from Tennessee Polytechnic Institute with a Bachelor’s Degree and from the University of South Carolina with a Master’s Degree. Mrs. Hodge worked and taught at the Macedonia High School and Timberland High School in Monks Corner, SC, as a science teacher and librarian. She also worked at Charleston Southern University as a librarian. Mrs. Hodge was a member of the Hickman Baptist Church and served on the Board of Directors for the New Salem Association of Baptists. She was also a member of the Womens Missionary Union. She was a longtime Atlanta Braves fan.

Funeral Services for Mrs. Hodge are scheduled to be conducted from the Hickman Baptist Church on Tuesday, May 21, 2019 at 2PM with Bro. Mark Stinnett. Interment will follow in the Baird Memorial Cemetery in Hickman, TN.

Visitation with the Family will be at the Gordonsville Chapel of Bass Funeral Homes on Monday from 3PM until 8PM and at Hickman Baptist Church on Tuesday after 10AM until service time at 2PM.

The Family requests memorials be made to the Hickman Baptist Church Mission Fund.