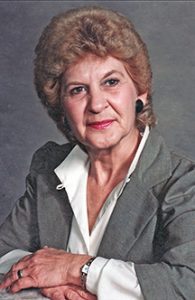 Mrs. Gwen Hesson Livesay age 87, a homemaker of Smyrna, died peacefully at her Foxland Drive home at 4:45 a.m. Tuesday morning May 28, 2019 with her loving and caring family at her bedside. She was pronounced deceased at 5:32 a.m. by Alive Hospice of Murfreesboro.

A “Remembrance of her Life” was celebrated at the Carthage Chapel of Sanderson Funeral Home on Thursday afternoon May 30th at 3 p.m. Interment followed beside her husband in the Garden of Gethsemane at Smith County Memorial Gardens.

Mrs. Livesay was the youngest of five girls and five boys of the late Charlie Payton Hesson who died on April 24, 1964 at the age of 75 and Mary Elanda Bowman Hesson who died on January 15, 1973 at the age of 87. She was born Opal Gwendolyn Hesson in Carthage on October 24, 1931. An interesting fact about her parents is her father was born August 3, 1888 and her mother was born thirteen days later on August 16, 1888 and both were from large Carthage families.

A granddaughter of Mr. Charlie and Mrs. Mary; Jean Frances Hindsley Malone, who was the daughter of Alma Hesson Hindsley, was raised by the Hesson family as a sister to their children. She died December 16, 2007 at the age of 71.

On August 30, 1952 Mrs. Livesay was united in marriage in Ringgold, Georgia to Putnam County native Robert Ernest “Bob” Livesay who preceded her in death from a massive heart attack on August 11, 1984, just nineteen days before their thirty second wedding anniversary.

Their only daughter, Teresa Gail Livesay Lane died on September 19, 2012 at the age of 54.

Mrs. Livesay was a member of the Haywood Hills Baptist Church on Haywood Lane in Antioch where she served as a longtime Sunday school teacher.

She was saved at an early age and before moving to Smyrna was a member of the Carthage First Baptist Church.