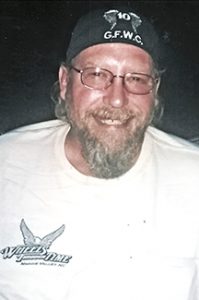 Albany, New York native Patrick Duffy of the Defeated Creek Community died at the age of 52 at 10:33 a.m. Tuesday Monday morning May 28th at his Ash Hopper Hollow Lane home following a brief battle with lung cancer. Mr. Duffy was under the care of Avalon Hospice of Cookeville.

Mr. Duffy was at the Carthage Chapel of Sanderson Funeral Home and had made the decision to be cremated which was performed at Cumberland Family Services in Algood.

A memorial service will be planned at a later date at the Justified Motorcycle Club in the Gladdice Community where he was a member and an avid motorcycle enthusiast.

In 1999 he was united in marriage to Orlando native, the former Debbie Lynn McClure.

He was born Patrick Bernard Duffy in Albany in Albany County, New York on April 15, 1967 and was one of three children of the late Judith Ann Loftus Duffy and Bernard Anthony Duffy of Albany.

Mr. Duffy was a non-denominational Christian and graduated from Albany High School in 1985.

The family relocated to the Elmwood Community from Orlando, Florida in 1998 and later purchased the Lawless family home in the Ash Hopper Hollow.

Mr. Duffy was employed as a miner with Nyrstar in Gordonsville since its inception.

Surviving in addition to his father and his wife Debbie of twenty years are his son, Brian Duffy and wife Katelyn of the Hickman Community; two brothers, Sean Duffy and Christopher Duffy both of New York.