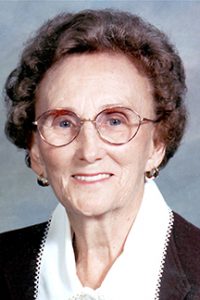 Mrs. Helen Phillips Shoulders, a longtime resident of the Dixon Springs Community, died at 9:34 a.m. Monday morning July 1, 2019 at The Pavilion Assisted Living in South Carthage under the loving care of HighPoint Hospice.

Mrs. Shoulders was among the first residents of the new Pavilion and made her home there since December 5, 2015.

Funeral services from the Carthage Chapel of Sanderson Funeral Home were conducted Wednesday afternoon July 3rd with Mrs. Shoulders pastor, Bro. Jimmy Gregory, officiating. Following the 3 p.m. services burial was beside her husband in the Beasley-Brooks section of the Dixon Springs Cemetery.

On July 18, 1942 she was united in marriage to Graveltown Community native and World War II Army veteran, who was a recipient of the Purple Heart, James Gordon Shoulders who preceded her in death on June 8, 2001 at the age of 80 following fifty nine years of marriage.

Mrs. Shoulders was a longtime employee of the former Carthage Shirt Corporation and retired from the Texas Boot Company in Hartsville.

She was saved and in August of 1950 moved her church membership by letter to the Peyton Creek Baptist Church.

The family requests memorials to the Peyton Creek Baptist Church.