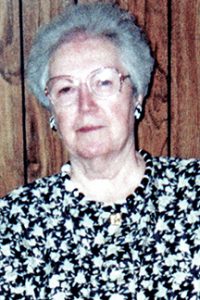 Longtime South Carthage resident and homemaker Mrs. Ruby Burton died at the age of 92 at 12:40 p.m. Thursday afternoon July 18, 2019 at the Smith County Health & Rehabilitation Center (formerly Concordia) in Carthage where she was being cared for since July 2nd.

Mrs. Burton was at the Carthage Chapel of Sanderson Funeral Home where her services were conducted by her nephew Bro. Jeff Burton at 1 p.m. Sunday afternoon July 21st. Burial followed beside her husband in the Gene Butler Cemetery in Brooks Bend.

She was united in marriage on June 22, 1946 in Rossville, Georgia to Brooks Bend Community native Johnnie Estes Burton. He preceded her in death on July 8, 2008 at the age of 84 following over sixty two years of marriage.

They had resided on Read Avenue in South Carthage since 1975.

Mr. and Mrs. Burton never had any children and were loving cared for by her Burton nephews and other family members following the death of her husband.

She was a member of the former Ensors Chapel United Methodist Church on the Jackson County end of the Funns Branch Community.

Surviving are two sisters, Betty Burton of the Gladdice Community and Helen Strong of Gainesboro.