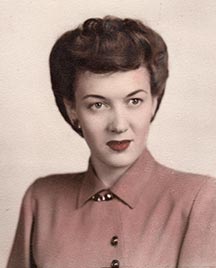 Mrs. Edith Moss Thornton, age 97 of the Gentry Community in Putnam County, died at the Rabbit Ridge Road farm home of her daughter at 2:23 AM, Sunday, August 18, 2019.

Mrs. Thornton was at the Carthage Chapel of Sanderson Funeral Home and was cremated at Cumberland Family Services in Algood. Mrs. Thornton’s life will be celebrated and remembered at the Rabbit Ridge farm on Saturday, September 28 from Noon until 3:00 PM. Rev. Lynn Bennett will officiate. Inurnment will be in the Moss Family lot in Section four at the Ridgewood Cemetery at a later date.

Mrs. Thornton was born Edith Love Moss in Elmwood, Tennessee on May 23, 1922. She was preceded in death by her husband of fifty-five years, John Fred Thornton. Mr. Thornton died on July 20, 1998. They were married August 27, 1943 at the Episcopal Church of the Advent in Nashville and were lifelong members of the Episcopal Church.

She was also preceded in death by her brother, Garland Letcher “G. L” Moss Jr. of Nashville who died December 5, 2018.

Mrs. Thornton was a 1940 graduate of Carthage High School where she was an honor student. She was a member of the “Black and Gold” staff and the “The Owl” staff in addition to being in the band, glee club, Allen Society, English and Commercial clubs, majored in Home Economics and was secretary-treasurer of the Home Ec club her Senior year. It was said of her in the 1940 school annual that “Few things are impossible to diligence and skill”.

She also attended Draughon’s Business College before being employed at the Consolidated Vultee Aircraft Plant in Nashville during World War II. She was a career professional secretary and retired from The Hermitage, Home of Andrew Jackson in 1991 after twelve years as Administrative Assistant to the Director.

She is survived by three children, Linda Thornton Archer of the Gentry Community, whose home she shared during her final years, Lynn Allan Thornton of Baxter and Nancy Thornton Waterhouse and husband Ted of Lebanon.