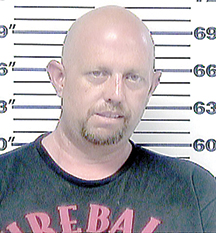 HOMICIDE CASE SUSPECT BACK IN JAIL

One of three suspects who face charges in connection with the murder of a South Carthage man is back in the county jail. In May, James M. Burns, 44, Greenbrier, was indicted by the grand jury for accessory after the fact in the death of Jason Taylor Neusse, 43. Burns is now being held in the Smith County Jail after his bond was revoked by Criminal Court Judge Brody Kane for an incident which occurred in Robertson County earlier this month. Burns was found in possession of two guns and a small amount of methamphetamine and now faces charges there, in addition to being indicted locally, according to Assistant District Attorney Jack Bare.