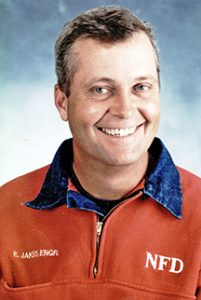 Mr. Ernie Jakes Sr. of the Sullivans Bend Community died peacefully at 2:02 a.m. Tuesday morning September 3, 2019 at his Preston Lane farm home with his wife and son Ernie Jr. at his bedside. Mr. Jakes suffered from lung cancer and was under the loving care of Kindred Hospice of Cookeville.

Mr. Jakes was at the Carthage Chapel of Sanderson Funeral Home and was cremated at Cumberland Family Services in Algood. No services are planned at this time.

On June 8, 1974 he was united in marriage to Nashville native the former Valerie Ann Williamson.

Mr. Jakes retired in 2003 and he and his wife purchased their farm on Preston Lane.

He had a twenty five year career as an engineer and Emergency Medical Technician with the Metro Nashville-Davidson County Fire Department. Mr. Jakes spent the majority of his career at Metro Station 9, better known as “The Bottoms”, and was a member of the International Association of Fire Fighters.

He was an avid golfer.

The Jakes family requests that memorials be made in Ernie’s name to the Fire Fighter Cancer Foundation at ffcancer.org