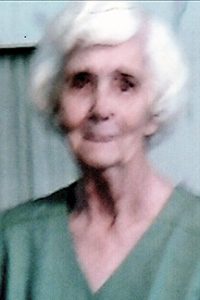 Mrs. Clio Elliese Slagle of the Bradford Hill Community died peacefully at her Ralph Lane home at 9:23 p.m. Tuesday evening September 24, 2019 at the age of 84 with her family at her bedside. She was pronounced deceased at 10:15 p.m. by HighPoint Hospice of Gallatin.

Bro. Jimmy Gregory officiated at the 3 p.m. Friday afternoon September 27th funeral services from the Carthage Chapel of Sanderson Funeral Home. Burial was beside her husband of over fifty eight years in the Garden of the Cross at Smith County Memorial Gardens.

She was born Clio Elliese Bilbrey in the Whitleyville Community of Jackson County on August 29, 1935 and was one of eleven children of the late James Hobert Bilbrey and Mendy Bea Bilbrey.

In Lebanon on March 10, 1951, Mrs. Slagle was united in marriage to South Carthage native Cecil Ralph Slagle who preceded her in death on Thanksgiving Day November 26, 2009 at the age of 80.

As a young girl, she attended school at Pleasant Shade and was an outstanding basketball player.

She was saved at a young age at the Church of God and was a member of the New Middleton Baptist Church.

Mrs. Slagle was a lady with a sweet, kind, and forgiving spirit and always found positive character in all with whom she came in contact with.

Her favorite bible verse was the part of II Corinthians 12:9 that says: “My grace is sufficient for thee; for my strength is made perfect in weakness.”