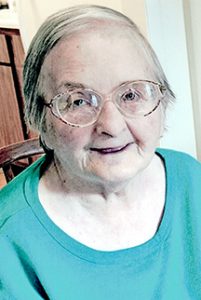 Graveside services and interment with military honors were conducted Tuesday afternoon October 22nd at 1:00 p.m. in the Garden of the Cross at the Smith County Memorial Gardens. Burial was beside her brother Bobby.

She was a 1956 graduate of Smith County High School where she was a member of the Future Teachers Association, the camera club, hobby club and Future Homemakers of America.

Miss Hackett was a member of the Peyton Creek Baptist Church in the Monoville Community.

She joined the United States Army on March 20, 1963 during the Vietnam War and was honorably discharged with the rank of Specialist 5th Class at Fort Sill, Oklahoma on March 18, 1966 with two years, eleven months and twenty nine days of service. While there she served as a Medical Corpsman.

Then on July 14, 1966 she joined the United States Air Force at the Air Force Base in Dallas, Texas and was again honorably discharged January 11, 1971 with the rank of Staff Sergeant at Charleston Air Force Base in North Charleston, South Carolina. While in the Air Force she again served as a medical corpsman and in addition as management of flight operations. Her term of service in the air Force was three years, one month and 5 days.

After leaving the active duty military she served as a member of the National Guard stationed in Smyrna and had total military service of twenty five years before retirement.

For her meritorious service she was awarded the Air Force Medal, Air Force Supply Medal, Good Conduct Medal and the Distinguished Service Medal.

Surviving is her caregiver, Bonnie Kemp of the Four-Way Inn Community; brother-in-law, Paul Carson and nephew Greg Carson and wife Rachel Jenkins Carson and their son Robert Wayne Carson all of the New Middleton Community.