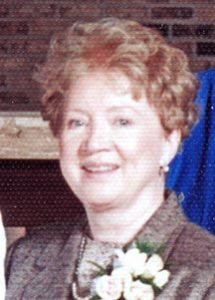 Mrs. Janine Brimm, age 89, a homemaker of Cookeville, died at 2:45 a.m. Friday morning October 25, 2019 at the family’s Woodview Circle home. She was under the loving care of Kindred Hospice and she was pronounced deceased at 3:17 a.m.

The Requiem Funeral Mass was said at 10 a.m. Tuesday morning October 29th at the St. Thomas Aquinas Catholic Church on North Washington Street in Cookeville with Father Chris Nunes Da Siva the Celebrant. A Mass of Christian burial was in the Brimm family lot in the West section at the Dixon Springs Cemetery at 2 p.m. Tuesday afternoon with Father Eric the officiant.

The only child, she was born Janine Andree’ Foiry in District XIV of Paris, France on January 11, 1930 and was the daughter of the late Andre’ Leon Foiry and Louise Denise Riou Foiry of Paris, France.

In Paris France on October 14, 1957 she was united in marriage to Riddleton Community native James Sanders “Sandy” Brimm.

They were preceded in death by a granddaughter, Sarah Avril Brimm, who died March 14, 2008 at the age of one year following a liver transplant at Monroe Carroll Childrens Hospital in Nashville.

Mrs. Brimm was educated in Paris, France schools where she graduated from high school in 1947.

She was a communicant of the St. Thomas Aquinas Catholic Church in Cookeville where she attended.

The Brimm family requests memorials to the charity of one’s choice.