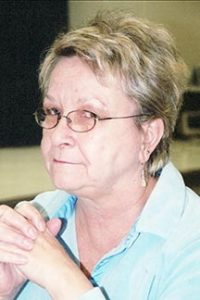 Mrs. Becky Thompson of the Defeated Creek Community died at the age of 71 at 7:56 a.m. Tuesday morning December 24, 2019 at the Smith County Health and Rehabilitation Center in Carthage where she had made her home since May 20th of 2019.

Mrs. Thompson was at the Carthage Chapel of Sanderson Funeral Home. She will be buried beside her sister in South Bend, Indiana where memorial services will be conducted at a date and time to be announced.

The eldest of three children, she was born Rebecca Ann Edwards in South Bend in St. Joseph County, Indiana on April 3, 1948 and was one of two daughters and a son born to the late Frank and Jean Small Edwards.

She and the father of her children, Connie Wilson Whited, were preceded in death by a son Dean Whited, who as a twin to Randy, died at birth on August 22, 1974.

She was also preceded in death by her sister, Vicky Edwards Boulton and her brother, Tim Edwards.

Mrs. Thompson retired from the Madison Suburban Utility District in 2011 with over thirty three years of service as a water quality control engineer.