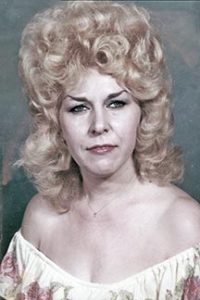 Graveside services were conducted Sunday afternoon January 12th and burial followed the 1 p.m. services beside her husband in Section five at the Ridgewood Cemetery.

Mrs. Kelly was one of two children of the late Gray Wysocki and Mildred Louise Wysocki Clark Kelly and was born Alice Louise Wysocki in Detroit in Wayne County, Michigan on October 26, 1943.

Mrs. Kelly was preceded in death by her only sibling, Dr. Lafayette “Fate” Brooks Kelly.

In Clarksville, Tennessee on November 11, 1959 she was united in marriage to Montgomery County native William Ray Kelly. He preceded her in death on January 9, 2012 at the age of 72 following over fifty three of marriage.

Mr. Kelly may best be remembered as operating the sporting goods department at the Carthage Wal-Mart store for over twenty eight years.

Mrs. Kelly received her General Education Degree through the Smith County School system, of which she was very proud.

She was employed at the former Carthage Shirt Corporation until the closing in 1993 and then worked at the Texas Boot Co. in Carthage until her retirement.

Mrs. Kelly was saved as a young lady, loved God and being obedient but never affiliated with an organized religion.

The Kelly family moved from Clarksville to Carthage in 1978 when Mr. Kelly began employment in the construction of the Hartsville Nuclear Plant.