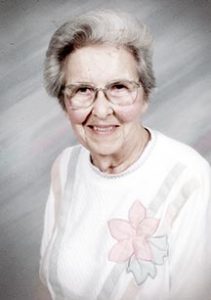 A Tanglewood Community centenarian, Mrs. Irene Frank, passed peacefully with her family at her bedside. Mrs. Frank died at 1:53 p.m. Friday afternoon January 10, 2020 at the Riverview Regional Medical Center in Carthage where she was admitted December 4th suffering from a hip injury. Mrs. Frank was age 102

Mrs. Frank was at the Carthage Chapel of Sanderson Funeral Home and was to be cremated at Cumberland Family Services in Algood.

Her cremains will be forwarded to the Donnell-Wiegand Funeral Home in Greenville, Illinois where memorial services will be conducted at a time to be announced. She will be buried with her husband, Murvil D. “Pete” Frank, in the McInturff Cemetery in Mulberry Grove, Illinois.

They were preceded in death by a granddaughter, Amy Elizabeth Moran who was born December 5, 1984 and died August 2, 1989 at the age of 4 following a thirty month battle with cancer and by their youngest daughter, Linda Frank who died March 7, 2015 at the age of 62 in Blair, Nebraska.

Mrs. Frank was a 1935 graduate of the Mulberry Grove Senior High School and attended Greenville University in Greenville, Illinois.

She was of the Methodist faith and was a retired insurance company secretary.

The Frank family has requested memorials to either the Emmanuel House or the Carthage Pavilion Activity Fund.