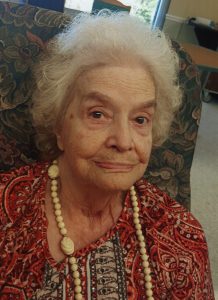 Mrs. Alyene Watson Shoulders, age 90, of Carthage died at 6:56 a.m. Saturday morning, July 25, 2020, at the Smith County Health and Rehabilitation Center in Carthage where she had been cared for since April 24, 2015. At the time of her death she was under the care of HighPoint Hospice.

In Ringgold, Georgia on June 25, 1949 she was united in marriage to Graveltown community native Kenneth Giddeon Shoulders, who preceded her in death at the age of 55 on May 2, 1985, following only thirty five years of marriage.

Mrs. Shoulders was saved at an early age and at the time of her death was a member of the Mt. Tabor Missionary Baptist Church at Pleasant Shade.

She was first employed at the Carthage Shirt Corporation and later at the W. E. Stephens Manufacturing Co. in Carthage and the joy of her life was the years she spent baby-sitting many children.