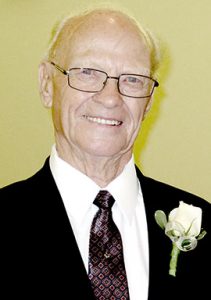 Elder Paul G. Patterson, age 90, of Hendersonville, Tennessee, was reunited in Heaven with his beloved wife Betty of 71 years, on Sunday, October 25, 2020.

He married the love of his life, Betty Sue McClanahan, on March 13, 1949. They were married 71 years until her passing in April of this year. They have two children: Paul Michael “Mike” Patterson (wife Darlene) and Kimberly Ann Roberts (husband Jimmy). They cherished their two grandsons, Brent Michael Patterson and Matthew Austin Roberts.

He was a proud Korean War veteran, where the US Army took him aside for his mathematical aptitude and gave him special training for the role of “computer,” manually calculating the trajectory of artillery with a slide rule and a pencil. He was a member of McFerrin Missionary Baptist Church and a 3rd Degree Mason.

Mr. Patterson’s early work life included time at Varallo’s Restaurant as a short-order cook. He was a graduate of Nashville Auto Diesel College.

He retired after 50 years from Tennessee Mat Company/Wearwell Inc. in 1995 where he was Plant Manager. He was known and respected for his integrity and strong work ethic.

His last months were spent in assisted living, where he was lovingly cared for by an awesome team from Brookdale Personalized Living and Always Best Care. A very special thank you to these ladies: Jennifer, Odilia, Madison, Haley, Jody, Katherine, Joan, Baylee, Mary, Janet, and Delores. At a time when family could only visit through a window, his every need was always met.

A celebration of life for Elder Paul G. Patterson will be held at 3pm on the afternoon of Saturday, October 31, 2020, at Hendersonville Funeral Home with the service being officiated by Pastor Johnny Carver of McFerrin Missionary Baptist Church. Visitation will be held two hours prior to the start of the service.