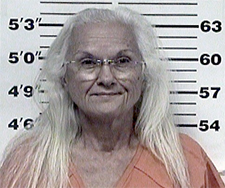 A woman faces multiple charges following an investigation conducted by a sheriff’s department K-9 officer in the Rome community. Police allege the woman sells drugs in and around Smith County, keeping a ledger of who owes her money. While on patrol, K-9 officer Sgt. Ridge Long noticed two vehicles parked side by side in the parking lot at the Dollar Store in Rome. When the vehicles left the store’s parking lot, Sgt. Long followed one of them onto Highway 70. The officer noticed the vehicle’s license tag had an expired registration and stopped the vehicle near the Wilson County line.

According to an offense report filed by Sgt. Long, while obtaining information from the female driver, the officer noticed several pill bottles inside a black bag. During the investigation, the officer discovered the pill bottles were not prescribed to the individual driving the vehicle. Billie Sullivan Blair, 66, Lebanon, was charged with five counts of manufacture/delivery/sale of controlled substances, possession of a legend drug without a prescription, possession of methamphetamine, felony possession of drug paraphernalia, tampering with or fabricating evidence and prescription drug fraud. Bond for Blair was set at $59,000.
Blair is to appear in general sessions court on March 3.
READ MORE IN THIS WEEKS COURIER!