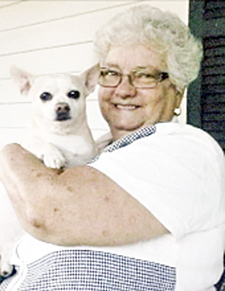 Mrs. Joyce Kemp, a homemaker of the Sullivans Bend Community died at 5:43 p.m. Friday evening January 15, 2021 at the age of 80 at the Cookeville Regional Medical Center where she had been hospitalized since January 6th.

Graveside services were conducted from the Boulton Cemetery on the family farm in the Sullivans Bend Community on Tuesday afternoon January 19th at 3 p.m. with Bro. Wallace Caldwell and Eld. Joe West officiating. Interment was beside her husband.

In Rossville Georgia on September 10, 1956 Mrs. Kemp was united in marriage to Sullivans Bend Community native Willie Haskell ”Buddy” Kemp who preceded her in death on March 18, 2020 at the age of 81 following sixty three years of marriage.

She began a career in nursing in 1970 at the old Smith County Hospital in Carthage and was a Licensed Practical Nurse having received her degree at the McFarland Hospital Nursing Program in Lebanon. Mrs. Kemp retired in 2014 with over forty four years of service to the patients in Smith County.