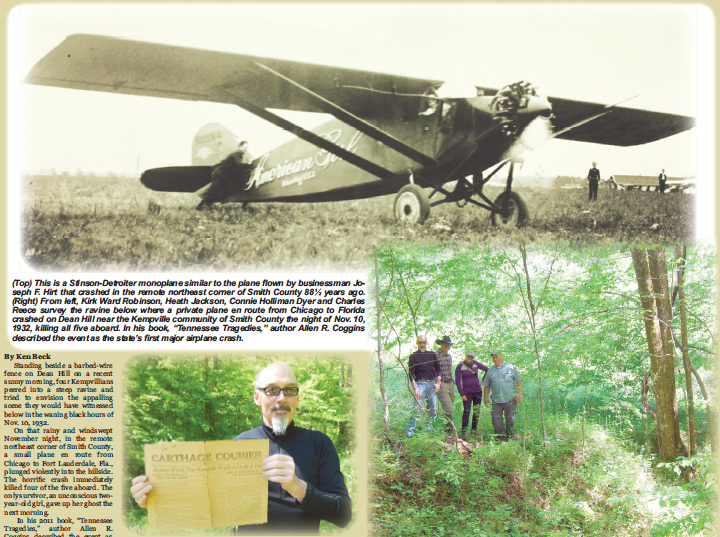 Standing beside a barbed-wire fence on Dean Hill on a recent sunny morning, four Kempvillians peered into a steep ravine and tried to envision the appalling scene they would have witnessed below in the waning black hours of Nov. 10, 1932.

On that rainy and windswept November night, in the remote northeast corner of Smith County, a small plane en route from Chicago to Fort Lauderdale, Fla., plunged violently into the hillside. The horrific crash immediately killed four of the five aboard. The only survivor, an unconscious two year-old girl, gave up her ghost the next morning.

In his 2011 book, “Tennessee Tragedies,” author Allen R. Coggins described the event as the state’s first major airplane crash. Indeed, the accident was splashed on the front pages of newspapers across the country as the Associated Press and United Press wires spit out the details over the next two days. “It was big news,” said Smith County High School English teacher Connie Holliman Dyer. “We live on Dean Hill Road, and our farm joined what was the Dean Hill Farm. My granddaddy, Esker Holliman, was one of the men that went to the site. The plane crashed into a deep, deep culvert. They had to manually pull the wreckage out.”