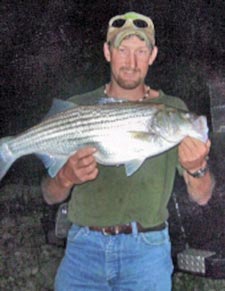 Horseshoe Bend Lane resident Kevin Bennett died at 6:13 p.m. Sunday evening, August 22, 2021 at the Summit Medical Center following an over decade-long battle with A.L.S. He was 40.

Born Kevin Todd Bennett in Carthage on January 22, 1981, he was the son of Larry Dwight Bennett and Anita Faye Pope Bennett of Horseshoe Bend.

On June 12, 2010 in Smith County, he was united in marriage to the former Jacqueline Danielle “Jackie” Tisdale.

Mr. Bennett was a 1999 graduate of Smith County High School where he was a four year member of the Future Farmers of America and served as Vice-President his Senior year.

He was employed in construction with Crockett-Phillips. It was often said that Kevin could operate any kind of machinery and was an especially skilled dozer operator. He was an avid fisherman, hunter, and lover of outdoors.

Mr. Bennett was a member of the Green Valley Missionary Baptist Church.

Surviving in addition to his parents and wife of over 11 years are his children, Dalton Bennett and Dixie Ramsey; a brother, Chris Bennett and wife Kay of Horseshoe Bend.