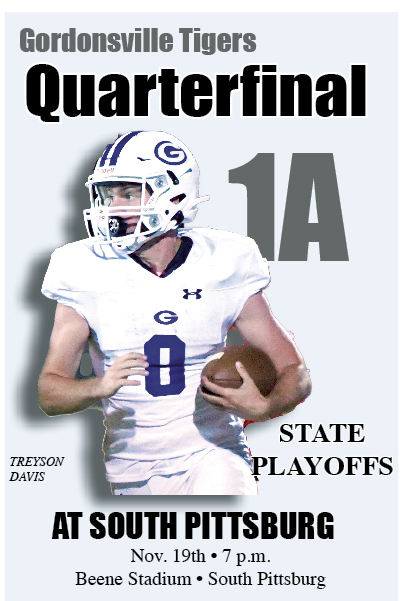 Gordonsville versus South Pittsburg has become a staple in the Class A High School football playoffs and this Friday night the two storied programs will add another chapter to their rivalry as they meet in the Quarterfinals at South Pittsburg’s Beene Stadium. Gordonsville, the Region 4-1A champion with an 11-1 record and a perfect 7-0 mark this season against Class A competition, earned the quarterfinal date with the Pirates after a 41-14 victory over Jo Byrns in the second round. Canaan Musgrove led the Tigers in the second round with three rushing touchdowns and 103 yards on just eight carries.

Meanwhile in the second round, South Pittsburg (8-2) dispatched the Tigers’ Region 4-1A foe Clay County 45-7 at Beene Stadium. “It is what we have been working for ­a year,” said Gordonsville head coach Scott Clemons. “That is why we went to the weight room and why we came in this summer. We know if we have a good year — we are going to have to run into them at some point in time. I am looking forward to it. We get to go down there and it is a great place to play with a great atmosphere. I am expecting a huge crowd so we are going to go give it our best.” The quarterfinal battle between the Tigers and Pirates will be their 17th clash all-time in the post season. The Black-and-Orange clad South Pittsburg owns an 11-5 lead in the playoff series.

The Pirates have won their last two games against Big Blue convincingly — with a 37-7 win in Gordonsville last season and a 40-0 victory in 2019 at South Pittsburg. The Tigers have been outscored 77-7 in the last two meetings. Gordonsville’s last victory in the series came in 2012 as the Tigers advanced to the quarterfinals with a dramatic goal line stand to seal a 14-13 victory. The win helped propel Gordonsville to the 2012 Class A state title. The postseason nemeses met for the first time in the playoffs during the 1986 Class A Quarterfinals — a 27-13 victory for the Pirates who would eventually be a Class A Runner-Up.