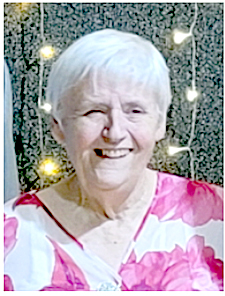 Mrs. Carol Conditt Petty, age 76, of Carthage died peacefully surrounded by her family at her Jefferson Avenue East home at 2:23 p.m. Tuesday afternoon November 23, 2021 following a period of declining health. She was pronounced deceased by Amedisys Hospice of Hermitage at 3:24 p.m.

Mrs. Petty is at the Carthage Chapel of Sanderson Funeral home where her service will be conducted on Sunday afternoon, November 28 at 1:00 PM. Rev. Monica Mowdy will officiate. Interment will be beside her husband of over twenty three years in Section One at the Ridgewood Cemetery in Carthage. Serving as pallbearers are: Caleb Smith, Josiah Tyree, Ethan Dillehay, Kammryn Weeks, Stefyn Weeks, Jared Gentry; honorary pallbearers, Steve Dowell and past band members.

Mrs. Petty was a 1963 graduate of Smith County High School where she was a member of the marching band and stage band all four years. She majored in Home Economics and Business Administration, was a F.H.A. class officer all four years and was chapter secretary her junior year, Chapter President her senior year and also Miss Home Economics her senior year and being so active in F.H.A. she held, junior, chapter and State Degrees.

The statement was made of her in her 1963 senior annual that she was tranquil, constant and amiable and “Love me, love my horse”. The Conditt farm was adjoining the western most city limits of South Carthage and was located on Lebanon Highway.

She and Harold will long be remembered for their commitment to the Smith County High School Marching Band where they drove the band instrument truck far and wide to all the band’s performances for twenty six years.

Mrs. Petty was a member of the Carthage United Methodist Church.

She was a longtime bookkeeper working for Harry Holland, Certified Public Accountant in Lebanon before the company was sold to Kraft C.P.A.’s and she was employed there until her retirement in 2016.

The father of her daughter and son, Difficult Community native Billy Bryant Dillehay, died at the age of 70 on March 3, 2015 following a battle with cancer.

The family has requested memorials to the Harold Petty Scholarship or Carthage United Methodist Church.