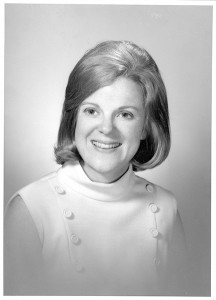 Barbara Bivens (Bobbi) Neal of Vienna, VA passed away on September 5, 2016. She was born in Monroe, NC, on September 25, 1942, the daughter of the late John N. Bivens Sr. and Alice Kate Morris. Bobbi graduated from Meredith College in Raleigh, NC with a Bachelor of Arts Degree in 1963.
Bobbi taught elementary school in Virginia Beach, VA, where she met her future husband, Kenyon Conditt (Ken) Neal of Carthage, TN. They married on August 16, 1969. After living in several parts of the country, Bobbi and Ken settled in Vienna, VA where they reared their three children. Bobbi taught at Epiphany United Methodist Preschool in Vienna and eventually became the school’s director, a position she held for many years. She was devoted to fostering early childhood development and studied the motivational development theory promoted by the internationally recognized Gesell Institute of Child Development in New Haven, CT. Bobbi earned an assessment certificate from the Institute and utilized these skills for the benefit of her preschool students and parents.
Bobbi was a caring and generous person. She was meticulously organized, attentive to detail, warm, and compassionate. She used these traits to enrich the lives of all who knew her, be they friends, students, colleagues, or family. Bobbi was an avid reader, gardener, and walker, and loved to travel. In addition, she was a passionate artist and enjoyed teaching her friends to paint. She was devoted to her church, Vienna Presbyterian, and served the church as a deacon. Bobbi also enjoyed spending time with her six grandchildren and was a loving “Nana” to all of them.
In addition to her husband, Bobbi is survived by her son Samuel Bivens Neal and wife Lacey, and their children Garrett and Kennedy; her son John Kenyon Neal and wife Archer, and their children Kenyon and Russell; her daughter Kathryn Neal Toomajian and husband Philip, and their children, William and Jackson; sister Mary Ann (Bivens) Ritchie; brothers Laurence J. Bivens and John N. Bivens Jr. Visitation will be Friday, September 9, between 6 and 8 PM at Money and King Funeral Home, 171 Maple Ave. W, Vienna, VA. A memorial service will be held on Sunday, September 11, at 2:30 PM at Vienna Presbyterian Church, 124 Park Street NE, Vienna VA. In lieu of flowers, the family requests any memorial contributions be made to the memorial fund at Vienna Presbyterian Church.

Bobbi Neal is the wife of Ken Neal formerly of Carthage, TN.

This notice provided as a courtesy to the Neal Family.