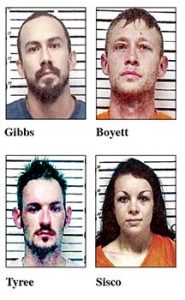 The burglary, in which various tools valued at more than $1,000 were taken, was reported on August 8 to sheriff’s department Deputy Robin Bellar. As a result of an investigation conducted by sheriff’s department detectives Steve Babcock and Dusty Hailey, four people have been charged in connection with the burglary.