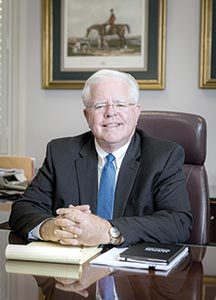 In the summer of 1962, a 10-year-old Randall Clemons walked into the Granville branch of Jackson County Bank and plunked down $16 to open his first bank account. Four dollars came from mowing his aunt’s lawn and the other 12 bucks from selling a dozen newly-hatched ducks.
On Dec. 31, the financier, who grew up in Granville and Carthage, will retire after serving at the helm of Wilson Bank & Trust since it was founded in the spring of 1987. His business legacy? A thriving homegrown financial institution with assets of $2,774,000,000 and a workforce of 533 that serves customers at 28 locations in nine counties.

Thirty-two years and 11 months later, Clemons says he’s ready to call it a day — well, he thinks he is. “Sometimes it can be kind of hard to believe you’re to that age and ready to end it, but I think I’m ready to go to the next chapter in my life. I’m fortunate to still serve on the board of directors so it’s not a total cutting of the ties,” he said in an interview earlier this month.

Friends, associates and customers will have the opportunity to bid the bank’s chief executive officer well at a public reception 3-6 p.m. Friday at the bank’s operations center “I was the first employee, hired Feb. 1, 1987. We opened three months later with $5 million,” recalled Clemons, who previously spent three years with Smith County Bank in Carthage and 13 years with People’s Bank in Lebanon.