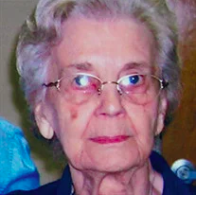 A Smith County resident, who was also a Holocaust survivor, has passed away.

Anderson was born March 29, 1926 in Köslin Pomerania, Poland. She married Joe K. Anderson on October 8, 1948 and he preceded her in death on September 7, 2014. She graduated from the Fürstin-Bismarck-Lyceum High School in Fürstin, Germany.

Funeral services for Mrs. Anderson were conducted from the Gordonsville Chapel of Bass Funeral Homes on Tuesday December 31.