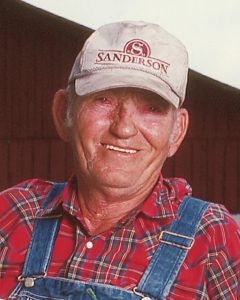 Kempville community farmer and longtime resident Mr. Jerry Hudson died peacefully Tuesday afternoon, March 31, 2020, at 1:45 p.m. at the Pavilion in Lebanon where he had resided since February 22nd. Mr. Hudson was 82.

He was a 1955 graduate of Smith County High School where he majored in Agriculture and was a delegate to the Future Farmers of America State Convention his first three years of high school. For his final three years at S. C. H. S. he played basketball and was a member of the Latin, Spanish, and Glee Club.

Also a skilled carpenter, Mr. Hudson had an innate love for farming, often working from the break of day into the night on his large Kempville community farm, and it was said of him in the 1955 yearbook: “Toil is the law of life and its best fruit”.

He was preceded in death by the mother of their three children, North Springs community native the late Betty Joyce Smith Hudson, who died on May 21, 2015 at the age of 72.

Mr. Hudson was a member of the Christian Community Fellowship Church in Kempville.

Mr. Hudson proudly served our country with the United States Army and was in the first group to be deployed to Cuba during the Bay of Pigs/Cuban Missile Crisis; howeve, this was averted due to threats made against Cuba and the Soviet Rule if implemented because of retaliations promised by then President John F. Kennedy.

The family requests memorials to either the Hackett Family Cemetery Mowing Fund or the Hickory Grove Christian Community Fellowship Church in Kempville.