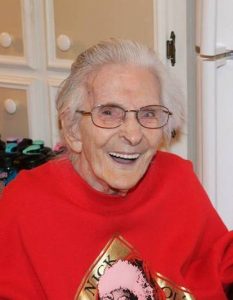 Mrs. Battersby was born July 11, 1916 in Vineland, NJ, a daughter of the late Adon Beckett and Nellie Mori Beckett. She married Irvin T. Battersby on August 13, 1951 in Maryland and he preceded her in death on March 13, 1985. Mrs. Battersby was also preceded in death by son-in-law, Ronnie Dixon and sister, Vonda Mori. She was raised Catholic. Mrs. Battersby moved to Tennessee from Florida 28 years ago.

Funeral services for Mrs. Battersby were conducted from the Carthage Chapel of Bass Funeral Homes on Monday, June 1, 2020, at 11AM with Chaplin Jason Lewis officiating. Interment followed in the West Cemetery in Difficult.