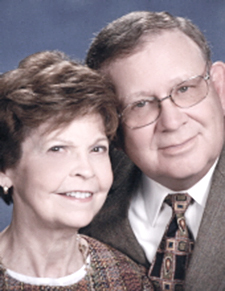 His wife and soul-mate of almost fifty-four years, Janice Chaffin, who he affectionally called “his brown-eyed girl,” followed him in death with her family at her bedside at 8:25 a.m. Thursday, February 25, 2021, also at their beloved home.

A joint funeral service for the couple is scheduled for Sunday, February 28, at 3 p.m. at the Maple Hill Church of Christ where both were dedicated members and Mr. Chaffin served as an elder. Sons, Chris and Patrick, will deliver the eulogies. The Chaffins will be buried side-by-side in the Garden of Everlasting Life at the Smith County Memorial Gardens with the Chaffins’ nephew Jeff White delivering the benediction. The Veterans Honor Guard will conduct full military honors at the graveside.

The Chaffin family will receive friends at the Ligon & Bobo Funeral Home at 241 West Main Street in Lebanon on Saturday from 3 p.m. until 6 p.m. The visitation on Sunday will be at the Maple Hill Church of Christ from 1 p.m. until the memorial service begins at 3 p.m.

Mrs. Chaffin was born Janice Marion Lafever in Detroit, Michigan, on December 18, 1937, and was one of two children of the late George E. Lafever and Arlie Mable Palmer Lafever. Jan was a 1955 graduate of South East High school in Detroit. She attended the McClain College of Secretarial Science and graduated from David Lipscomb University in 1966. She was then employed at the General Motors Corporation in Detroit as a Material Handling and Picking specialist for three years. She also served as executive assistant for senior leadership executives in Detroit.

Bob, known in his hometown of Carthage as R.C., was born Robert Rogers Chaffin on the Roaring River family farm in Jackson County. He was one of two children of the late Robert Franklin Chaffin and Lois Maylene Maberry. He was a 1962 graduate of Smith County High. He graduated from David Lipscomb University in 1966 with a degree in finance and economics and in 1981 received a master’s degree in business administration and finance. He then was employed at General Motors Corporation for 35 years where he was Finance Director and Director of Information Systems before retiring on December 31, 2000.
The Chaffins were married at the East Detroit Church of Christ by the late Ernie Scarborough on August 8, 1964. Following retirement he and Jan returned to Lebanon and placed membership at the Maple Hill Church of Christ where he was ordained as an elder, a capacity in which he served until his death.

The Chaffins are survived by their two sons, Christopher Chaffin and wife Valerie of Carthage, and their two children, Kai’a, and Ethan; Patrick Chaffin and wife Gabrielle of Nashville and their four children, Maggie, John Patrick “J.P.”, Ryan, and Cameron; and preceded in death by a grandson, Shawn Robert Chaffin.