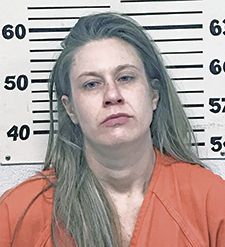 A Gordonsville woman charged in the shooting death of a Hogans Creek area man made an initial court appearance last week.

Tara Leigh Greene, 33, was charged by the Tennessee Bureau of Investigation (TBI) with criminal homicide and theft of property between $2,500 and $10,000 on Friday, February 26. Charges stem from the shooting death of Wendel Wilkey (Wenn) Bennett Jr., 47 of the Thompson Hollow. Greene appeared before General Sessions Court Judge Branden Bellar on Monday (March 1) for a bond hearing.

Judge Bellar did not set a bond for Greene who has been held in the county jail without bond since being arrested the day of the shooting.