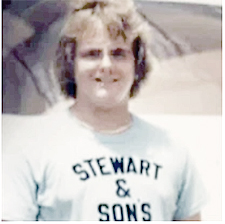 Mr. Stewart was born May 16, 1965 in Lebanon, TN, a son of the late Fred Gene Lackey and Mary Elizabeth Ingram Stewart. He was also preceded in death by Father and Step-Mother; Orra Lee Stewart and Pauline Barkley Stewart, and by Brother-in-Law; Joe Grisham.

Mr. Stewart was a 1983 graduate of Lebanon High School. He loved to fish and be outdoors. He was always trying to lend a helping hand and especially enjoyed his grandkids. Carl loved antiques and coin collecting, often visiting yard sales and auctions to find deals. He spent much of his life working on antique cars with his family. He was baptized at the age of 16 in Orlando, FL at a Missionary Baptist church.

Celebration of Life Services for Mr. Stewart are scheduled to be conducted from the Carthage Chapel of Bass Funeral Homes on Thursday, November 18, 2021 from 5PM until 7PM.